I was convinced that I felt an earthquake last night. I was just drifting off to sleep and must have drempt it as there was no record of our seismometer when I got into work this morning. However, in checking my iPhone for (non-existent) earthquake reports I did come across two local earthquakes that happened over Christmas whilst I was away in Morocco that I would have otherwise missed. This is quite a coincidence as I can’t remember any local earthquakes in nearly five years.

The first was on Christmas Eve, magnitude 2.1 and felt in Stoke-on-Trent, Staffordshire, UK, the second magnitude 1.7 on Christmas Day and not felt. Here are the seismograms recorded at Keele University on our School Seismology project seismometer. 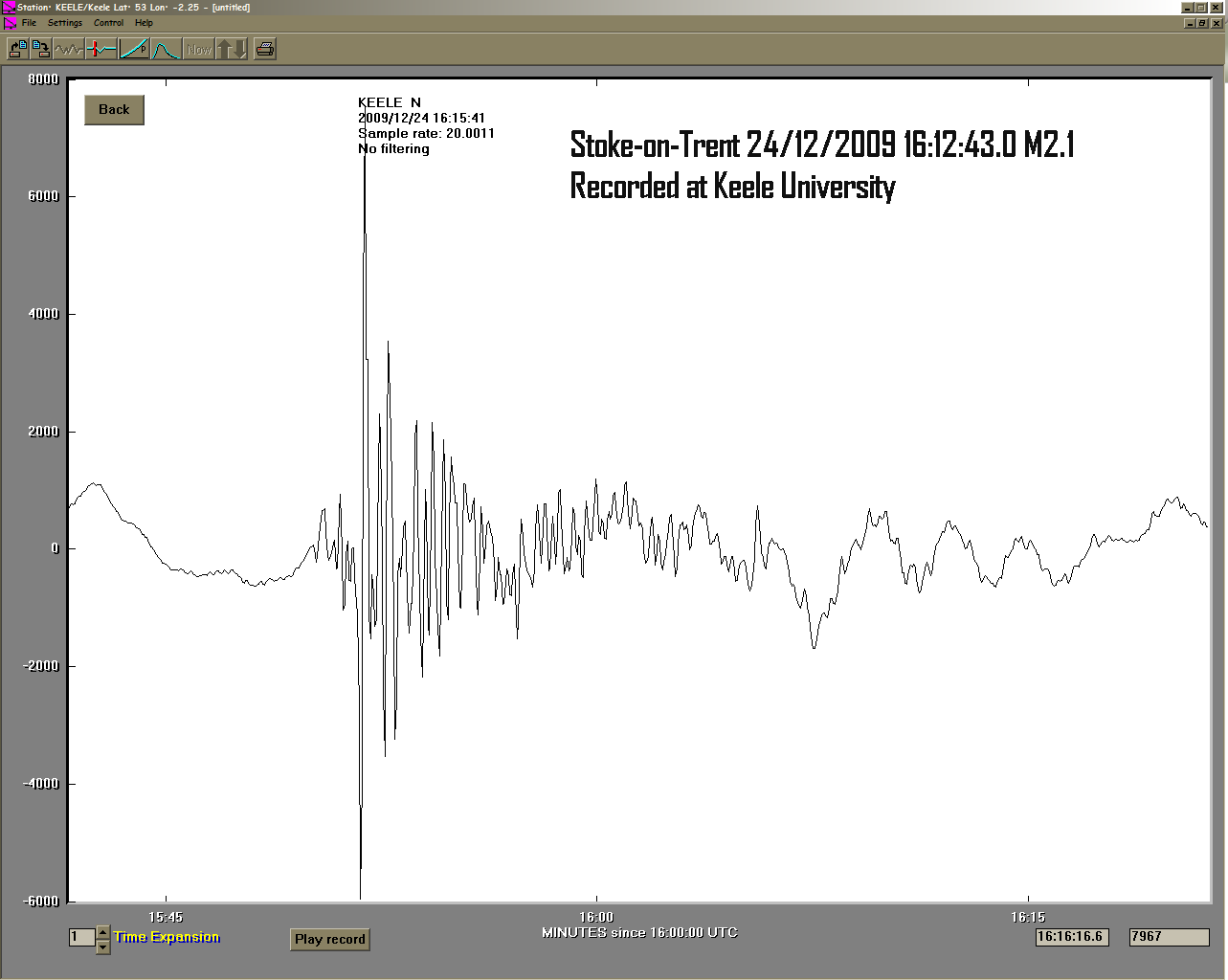 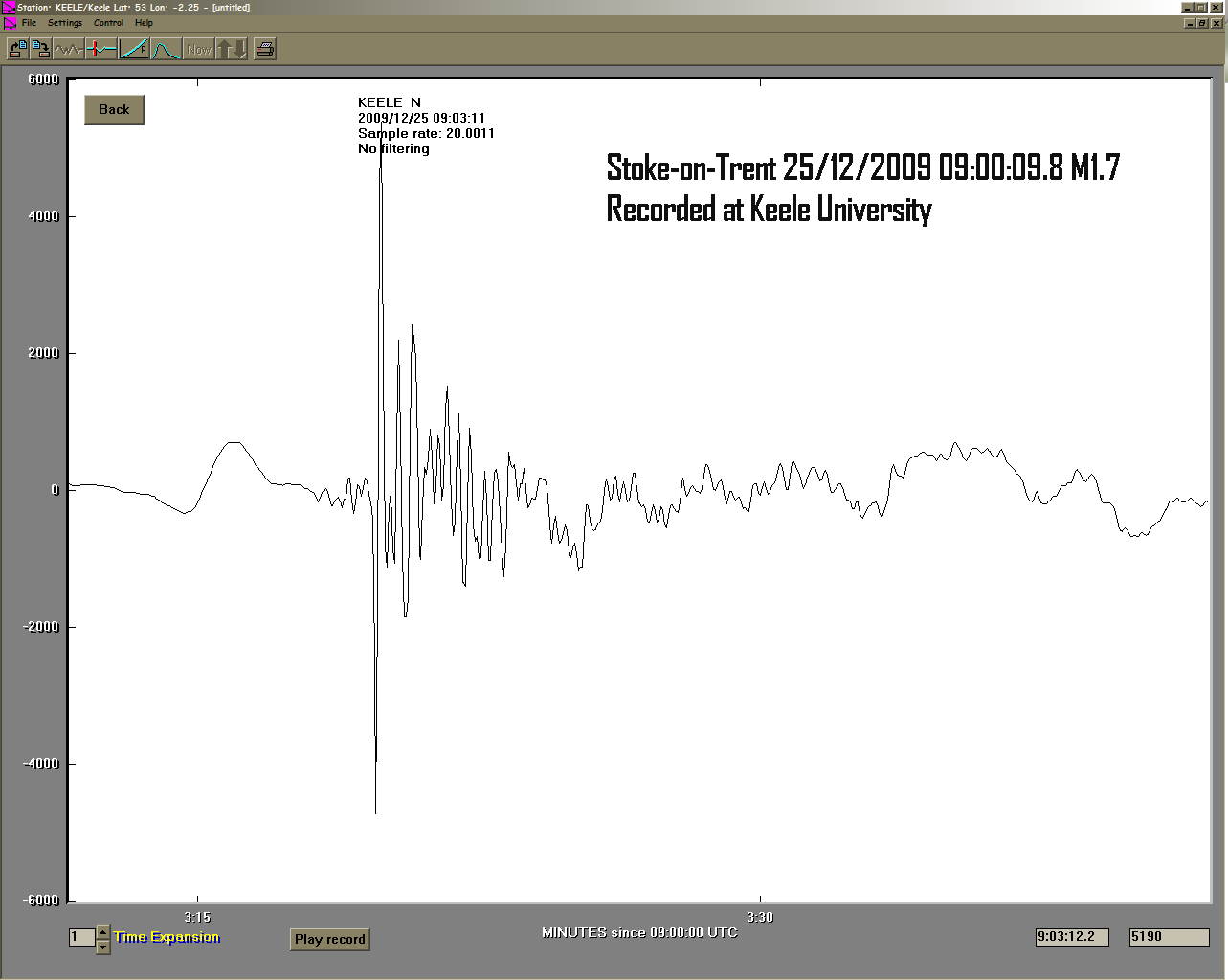 When I first came to Keele University in the late 1980s, little did I realise the seismic activity of the area related to the area’s coal mining heritage. I have felt over a dozen local earthquakes over my time here.

Since the latter part of the nineteenth century several areas in North Staffordshire have experienced occasional series of Earth tremors which are known locally as ‘goths’ or ‘bumps’.

Between early 1975 and August 1997 the Hanford and Trent Vale areas in the southern suburbs of Stoke-on-Trent over 50 events were felt, the largest being a magnitude 2.8 event on 15th July 1975 which caused some local damage. The earthquakes were associated with the extraction of the Ten Feet seem which was mined between 1973 and 1977 from the Wolstanton pit. Activity centred on the region above the face and the pillars of adjacent seems. Events could not be correlated with any of the major or minor geological faults in the area.

Swarm activity started again in May 1980. Activity was located in two centres, one near Cobridge, the the Banbury seem was being worked, and one near Talke, where no mining was currently ongoing. 11 events were felt during this period including the magnitude 3.3 Talke Pits event on 9th November 1980, the largest local event felt in recent times.

Between 1982 and 1987 activity in the region was very low, although the Lleyn Peninsula earthquake on 19th July 1984 was felt strongly in Staffordshire. On 2nd July 1987 an earthquake was felt in the Hanley region. A series of events the occurred in the Smallthorne district over the next few years culminating in a magnitude 3.0 earthquake on 4th March 1990. A month later, on 2nd April the Bishop’s Castle earthquake (magnitude 5.1) in the Welsh borders was felt strongly across the region.

Two swarms of earthquakes became active in February 1995. Initial activity was located between Wolstanton and Cobridge and started with a magnitude 2.5 earthquake on 20th February with six felt events and 108 recorded at Keele in a week. Activity decreased after the 26th April 1995 magnitude 1.4 event but recommenced in May 1966 with a series of four earthquakes including a felt magnitude 2.8 on 6th May.

A second swarm became active two days after the first on 22nd February 1995 located south of Newcastle-under-Lyme with an initial event of magnitude 2.3. Five events at sporadic intervals were felt. Events in this second area show typical characteristics of mining induced earthquakes with a clear rise in activity during the working week and a decrease at weekends. There was a period of quiesence after the magnitude 2.3 event suggesting that this had released a significant amount of the local stress, sufficient to halt local activity for a week.

Also felt in Staffordshire during this period was a magnitude 3.4 earthquake near Shrewsbury on 7th March 1996

Activity in the area south of Newcastle-under-Lyme, between Whitmore and Keele recommenced between October 1997 and April 1998 with numerous felt events, the largest being around magnitude 2. Activity largely ceased in this area towards the end of 1998 with the closing of the Silverdale Colliery. An earthquake of magnitude 2.8 occurred on September 7, 1999 about 1.5 km southwest of the previous mining induced events and a magnitude 2.4 occurred in the same Whitmore Wood area on October 2, 1999.

On the 2nd January 1996 two tremors struck Kidsgrove, the latter causing minor damage. There was also a magnitude 2.8 event on May 6, 1996 in Cobridge that was felt across North Staffordshire. Further Cobridge earthquakes happened on August 9, 1998 and February 24, 2000 (1.7 magnitude).

February 22 to March 10, 2003 saw a series of six earthquakes near Whitmore with magnitudes between 1.3 and 2.3. The last earthquakes prior to the recent Christmas 2009 events occurred in the Wolstanton-Cobridge area on June 8, 2005 with a magnitude of 2.6.