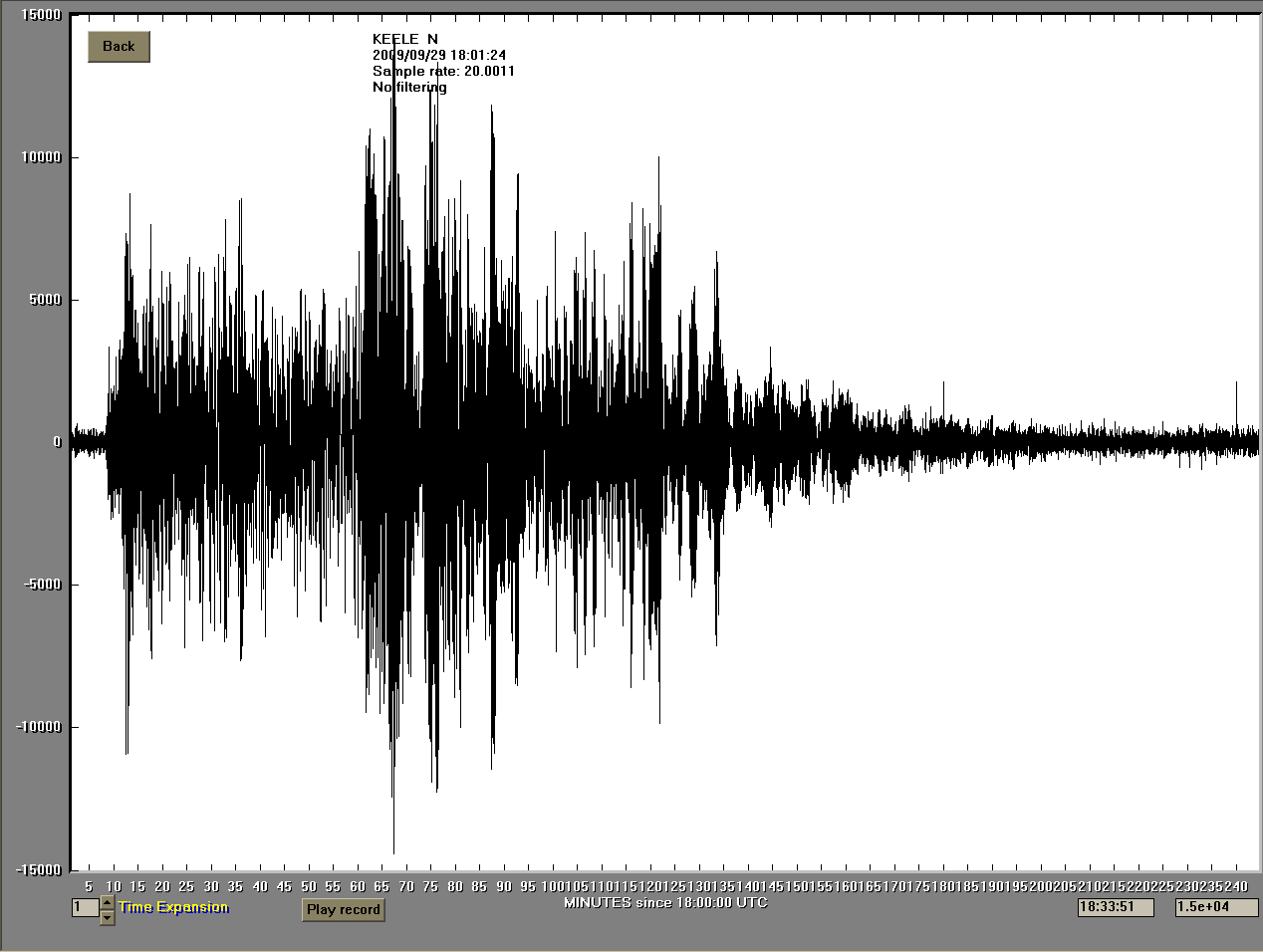 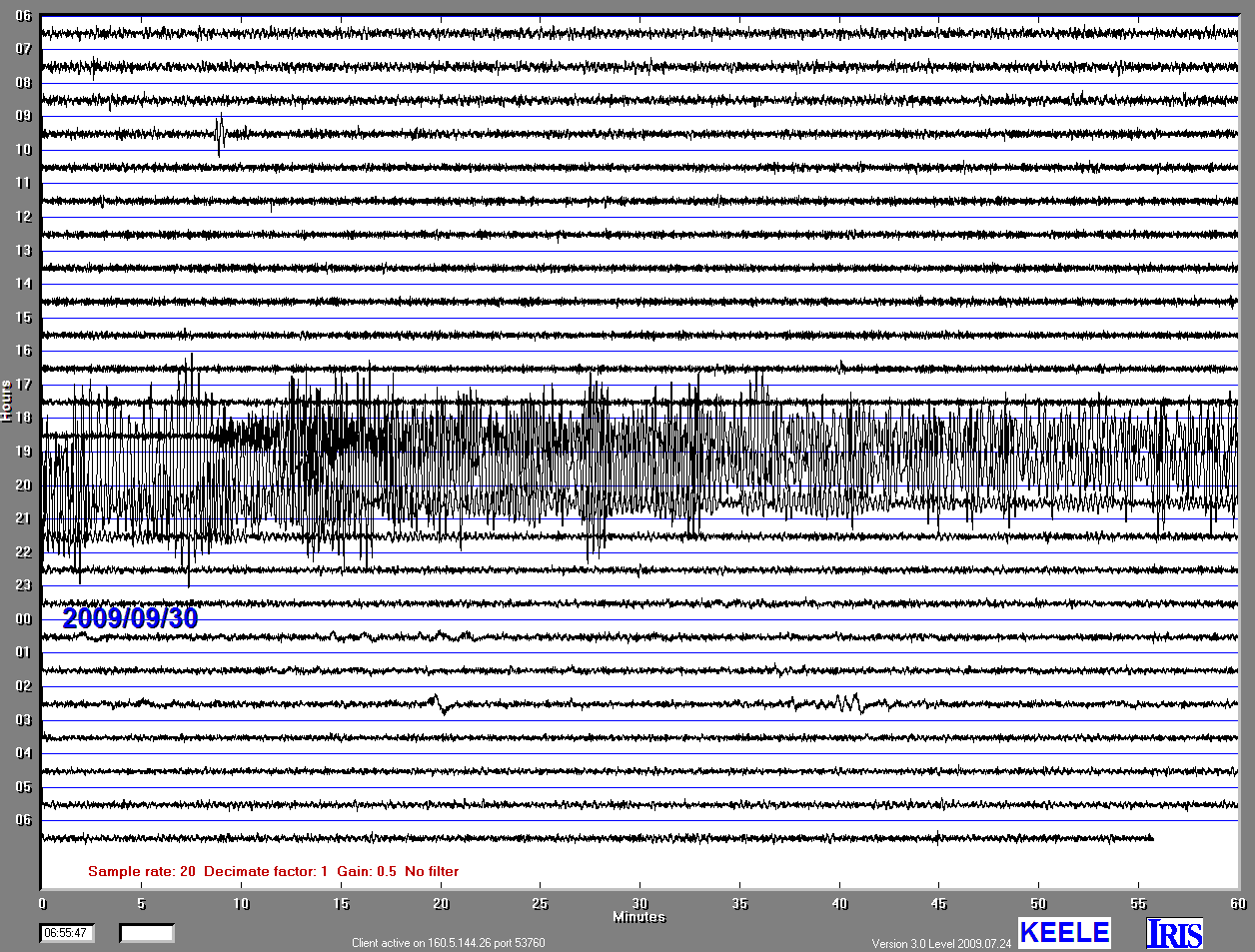 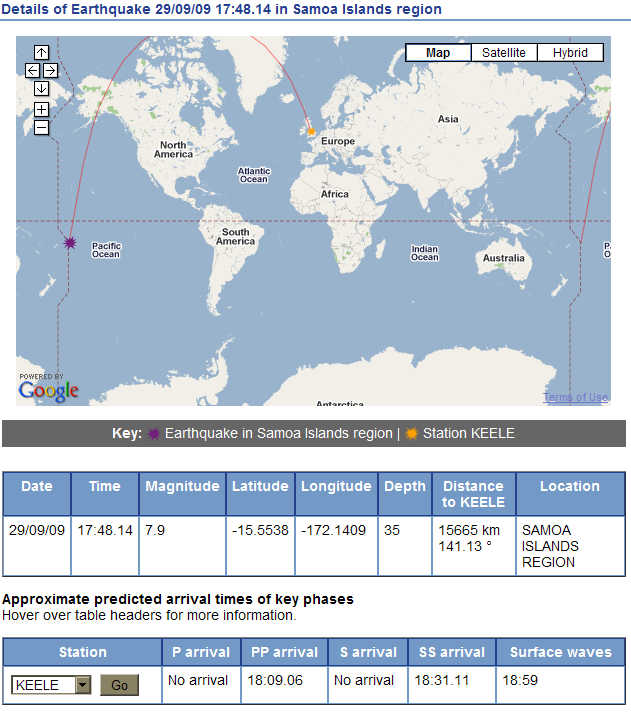 This earthquake caused a tsunami which hit the local islands causing at least 65 deaths in Samoa and at least 20 deaths in American Samoa according to the BBC.

It is unusual in that although it occurs close to the trench where the Pacific Plate is subducted beneath the Australian Plate, the faulting mechanism has been determined as being a normal fault rather than a thrust.

Note that as Keele is 15665km as the earthquake travels from the epicentre the first arrival reaching Keele is actually PP, rather than the direct P-wave which is intercepted by the Earth’s core.

The Keele seismic station is part of the UK Seismology for Schools programme.

It seems that an MP has now picked up on the Bristol Channel Tsunami story. Paul Flynn, Labour MP for Newport West, has set down an Early Day Motion that “That this House notes the consensus expert view that a tsunami caused the flood of the Gwent and Somerset levels in January 1607; believes a similar event now would result in massive destruction and loss of life; and calls for an early warning tsunami watch on British coasts.”

Talk about a waste of tax payers money.

Janunary 30th, saw the 400th anniversary of the Bristol Channel ‘Tsunami’ of 1607, details on the BBC News website.

I’ve a few doubts about this event despite the article – I remember the Timewatch based on this work and was not convinced then, and nothing has really changed to alter my point of view. The article states “Experts believe severe flooding on 30 January 1607 in south west England and south Wales was caused by a tsunami – and not a storm surge or high tides.” but doesn’t go on to say why a storm surge has been ruled out. I recall some comments about the weather at the time being nice but one can have a storm coming in from the Atlantic and still have sunshine in Somerset.

Roger Musson at the BGS (who states in the article that he thinks that is a storm surge) is quoted that there are earthquakes offshore south-west Ireland. The problem is the size and type of the earthquake needed to generate a tsunami. One needs at least a magnitude 7 ‘quake for a half decent tsunami (and the Indonesian Boxing Day 2004 event was 3000 times more powerful than this at 9.3). These events are only generated at subduction zones, magnitude scales with fault length and a very large thust plane is needed. As far as I know there isn’t a subduction zone off Ireland.

The source of the 1755 ‘Lisbon’ earthquake and tsunami is disputed but at least there is the remnants of the Alboran subduction system nearby.

Footnote: Is it really the 400th anniversary? When it happened, Britain had a different calendar and people at the time thought it was still 1606.