Keele University, where I work, has a plan to become self-sufficient in energy. This involves installing a variety of energy sources such as wind turbines, solar panels and ground source heat pumps, but one of the major projects that is currently underway in pilot form is the extraction of methane from the coal seams beneath campus. I was fortunate enough to be allowed to visit the drill site at the end of last week. 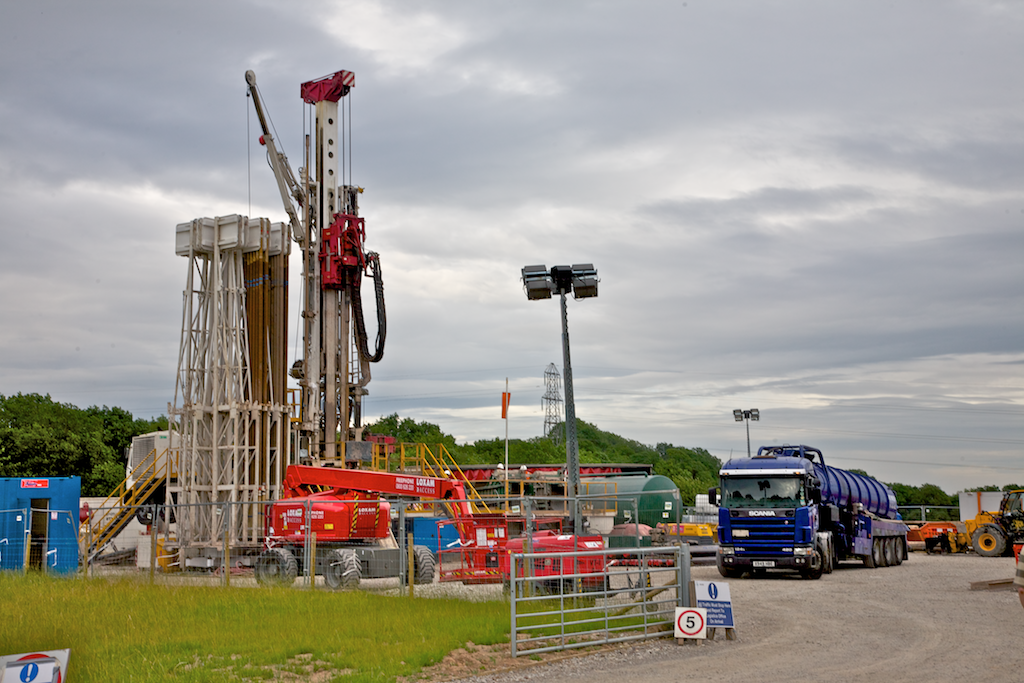 The first impression of the site is its relatively small size, about the size of a football pitch and how quiet it is. From 100 metres away the road noise from the M6 motorway is louder.

The drill rig is also smaller than I expected it to be and, as can be seen in the image, is actually mounted on the back of a truck. The drilling plan is shown schematically below [not to scale]. 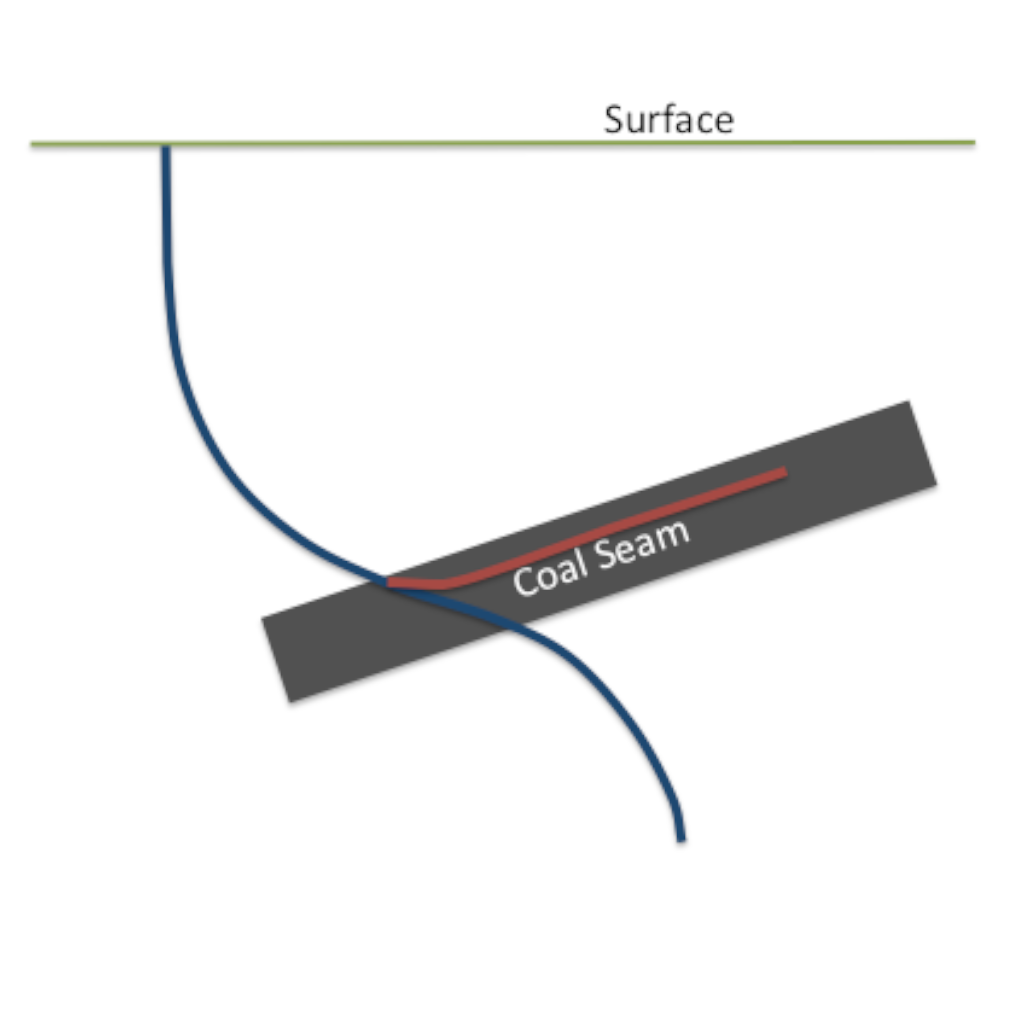 The ‘mother’ borehole (in blue in the diagram) is drilled to about 1000m depth using directional drilling in an ‘S’ shape, shallowing through the target coal seam, and then steeping downwards to form a sump. This is the current stage of the drilling.

The drill bit will next be withdrawn back up the hole to the level of the target seam (in this case the Great Row Coal) and a spur drilled along the the coal seam itself, slightly dipping upwards (in red on the diagram). Water then drains from the coal seam to the sump where it is pumped out. The draining of the water decreases pressure in the seam and stimulates the release of methane from the coal.

If this proves successful, and the mother bore is already showing promising signs of methane, then the next stage will be to drill a number of other bores through a variety of seams, extract the methane which will then be piped to the University’s boiler house.

Keele is blessed with several unmined coal seams below campus. The land on which the university was built was once owned by the Sneyd family who built their family seat, Keele Hall, here. Whilst making, and losing, a fortune from coal mining in North Staffordshire they had the common sense not to undermine their own house!

The other thing that we are interested in are the bottom hole temperatures. North Staffordshire coal mines were amongst the warmest in the country, and if, as we expect, the downhole temperatures are around 50-60°C then we also have the potential for geothermal energy as well.

Disclaimer: As always, this blogpost represents the views of myself only, and are not necessarily those of my employer. 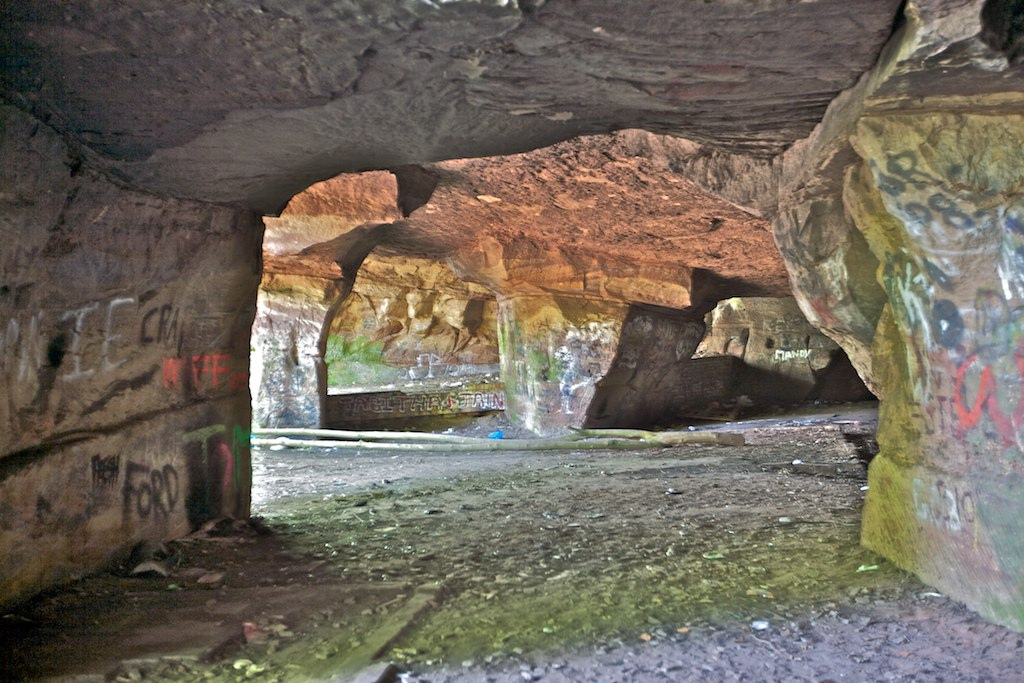 Now that teaching and exams have finished for another year, thoughts turn to the field. Whilst the likes of Geotripper and Dr Jerque get to visit some spectaclur and unspoilt places, my field work takes me to somewhere interesting but not quite as pretty. These are Beech Caves in Staffordshire. 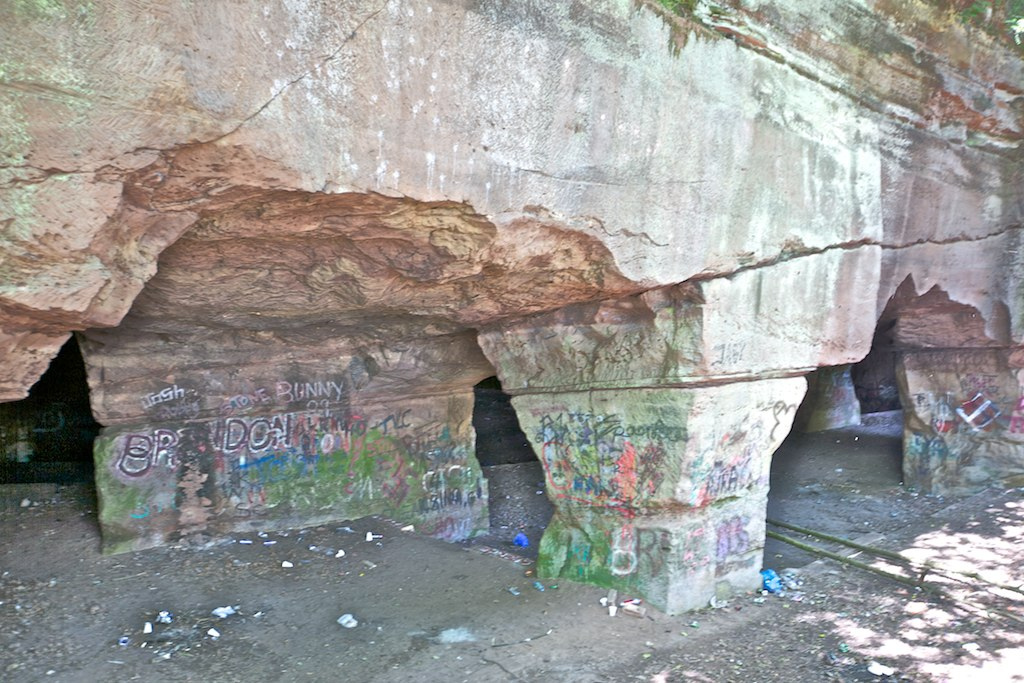 The caves aren’t natural but the result of mining the Triassic Bromsgrove Sandstone (formerly the Keuper Sandstone) for building stone. The pillar and stall workings were begun possibly in 1633 for the construction of the nearby Trentham Hall. The Trentham records for August 31st 1633 note a Roger Low being paid 22 pence per score for carrying 130 foot of stone from Beech. 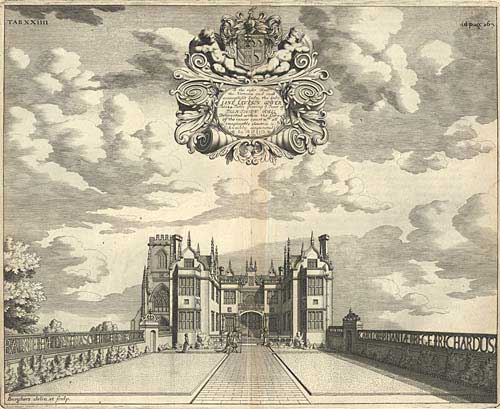 This was the first of several halls at Trentham, being rebuilt in 1690 and again in the 1830s, ultimately becoming one of the finest buildings in England. Unfortunately, pollution from the growing Potteries conurbation filled the lakes with sewage and the magnificent hall was abandoned and demolished in 1912. The gardens did remain and now the lakes have been cleaned and the gardens refurbished (well worth a visit) there are plans to rebuild the hall as a five star hotel. 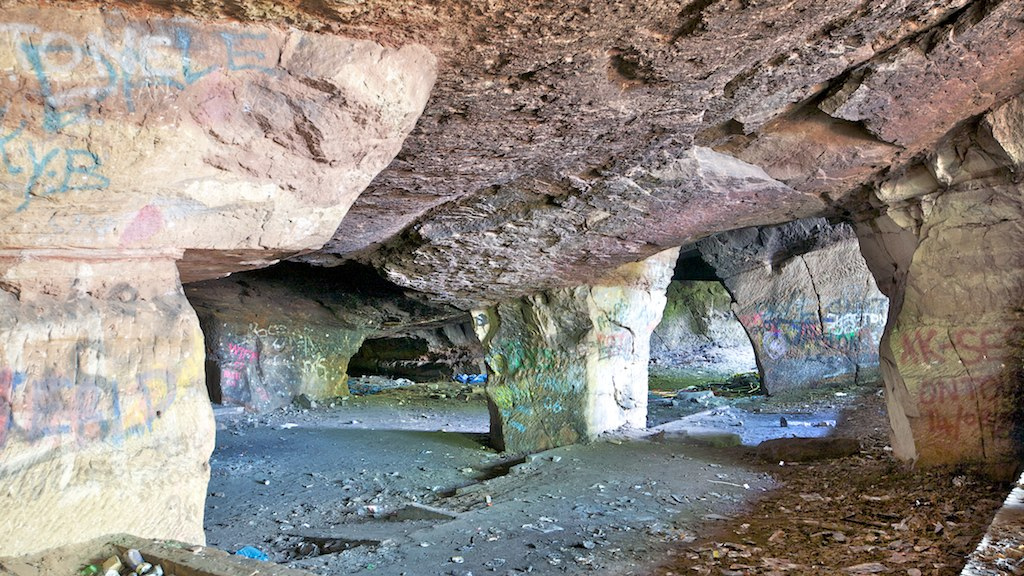 Beech Caves still show the evidence of the hand-pick marks by the miners as they followed a layer of pale-coloured sandstone dipping gently down into the hillside. The thick overburden made mining rather than quarrying a more attractive proposition.

In more recent times the caves were probably used as a munition store in the second world war but lately they have been used for raves and other undesirable activities. The caves are now litter strewn and graffiti covered. The land owner and the local council now want to block off the entrances to stop the ne’er-do-wells from getting in. However, in doing so, they will bury an important piece of Staffordshire’s geological history. It would be a great shame if these historic pillar and stall workings were lost. Whilst understanding the landowner’s concerns for the site, it is hoped that some limited, secure access can be maintained for historians and geologists alike. 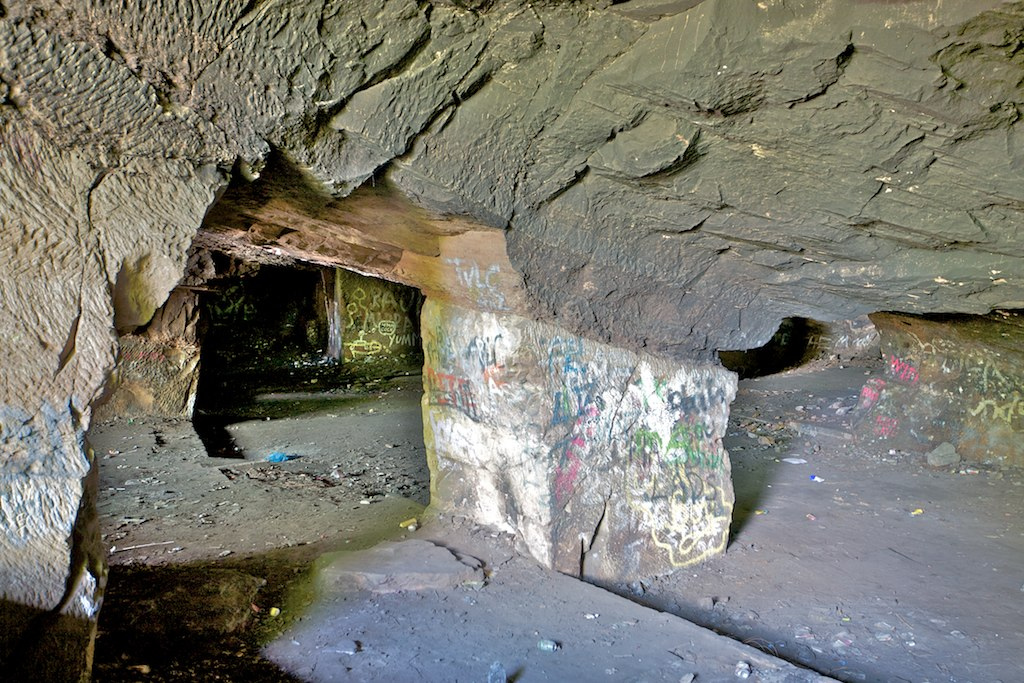 On a field trip to the Peak District this weekend. He is a close up of some Lower Carboniferous shark dermal denticles.

Some time around last Christmas I made the rash decision to attempt a photographic 365 project – to take a photograph every day of 2010. As a geologist, the natural theme was rocks, mineral and fossils, and so Rock365 was born. Well, I’ve just finished the first 100 days. To be honest I didn’t think that I’d get this far. I’ve pretty much run out of my own samples but fortunately Keele has been teaching geology for sixty years come this summer and I’ve got an excellent teaching collection to fall back on.

I’ve not been putting the images here on this blog (other than in the sidebar widget down on the right) for two reasons. The first is that I thought that they might clutter up this blog and get in the way of the other posts. The second is that by using posterous I can post images via a simple e-mail which might be easier for me when I’m away in the field.

The images can also be found on flickr or on google maps.

Two visits this weekend to Wenlock Edge, Shropshire with strongly contrasting weather (cold and wet on Saturday, warm and sunny on Sunday). This is Knowle Quarry at Presthope, the original GSSP of the Wenlock, and studied by Roderick Impey Murchison in his establishment of the Silurian System. Knowle Quarry is owned by the National Trust and open to the public but being a SSSI no collecting of material is allowed.

There are two distinct facies present, massive reef knolls and interbedded limestones and marls. The red colour in the photograph is below is iron staining on a strike-slip fault plane that cuts the reefs, the near horizontal slickenside lineations can be seen on the surface. 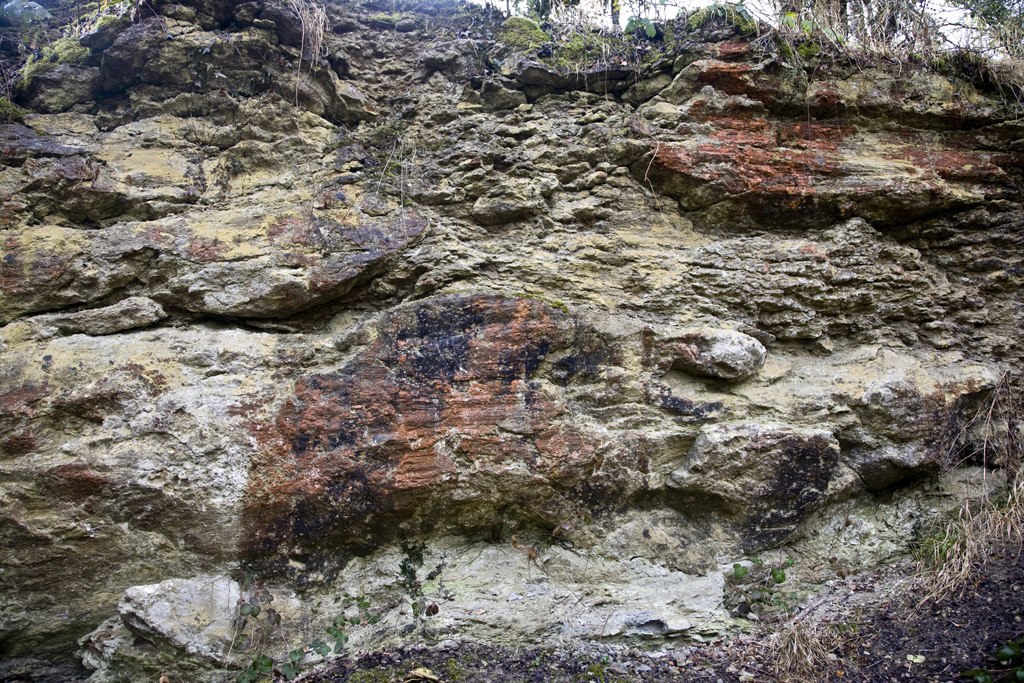 After studying the features here we moved on to the neighbouring Lea Quarry, which was active until recently. Note that the quarry is on private land and permission from the landowner must be given before entering. Here is the margin between the two main facies. 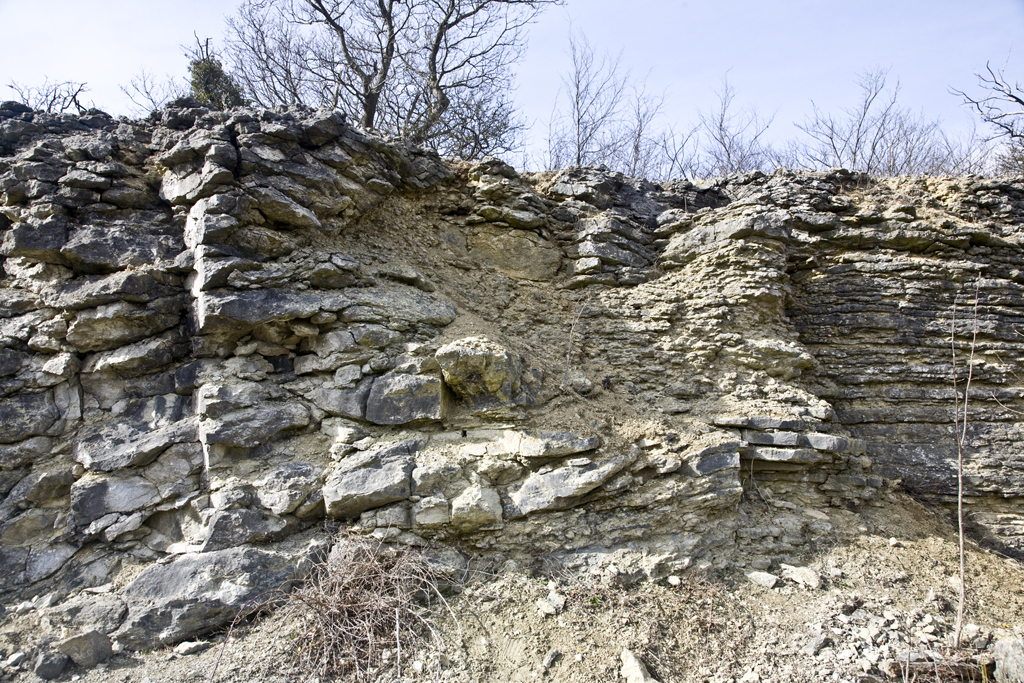 Here the recently quarried faces and the low sun (on the Sunday at least) led to some very successful fossil hunting. Note that I’m a geophysicist who was along on the trips as a van driver so I apologise in advance for any mis-identification.